The World's Carbon Center of Gravity 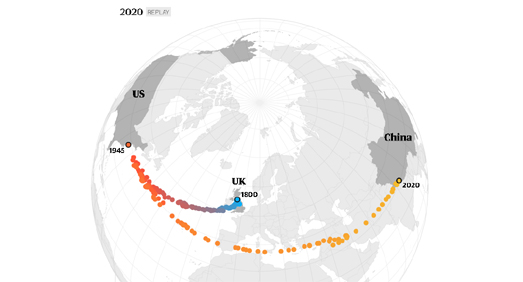 The Guardian has published an animated map which shows how the world's carbon 'Center of Gravity' has shifted over the last 200 years. The visualization reveals both how industrialization has been a disaster for the environment and how the major producer of carbon emissions has shifted from the UK in the 19th Century to the USA in the early half of the 20th Century and in the last 50-60 years towards China.

In How the world’s carbon ‘centre of gravity’ moved over 200 years The Guardian has calculated the carbon center for every year since 1800 by taking an average of each country’s latitude and longitude and by working out each country's annual carbon emissions. The countries which emit the most carbon in any year exert 'the strongest gravitational pull on the centre of emissions'.

The Guardian has included an explanatory note with its animated map pointing out that although China is now the world's largest emitter of CO2 there are still 36 other countries around the world that have per capita higher carbon emissions.

The World Resources Institute has also created an animated map which visualizes carbon dioxide emissions around the world over the last 160 years. The Changing Global Emissions Map however doesn't show the carbon 'center of gravity' but instead uses scaled circular markers to show the total carbon emissions of each country around the world increasing over time.

If you use the timeline beneath the map you can view an animation of the growth of carbon dioxide emissions over time. The timeline shows that a few western countries have managed to stabilize and have actually managed to slightly reduce their emissions over the last few years. Unfortunately these reductions pale into insignificance compared to the huge growth in carbon emissions in the rest of the world.

The Historical Global Emissions Map is another mapped visualization of carbon dioxide emissions through history. This map shows a gridded view of CO2 emissions weighted by the human population over time. This timeline view of the world's CO2 emissions provides a fascinating glimpse into the spread of the industrial revolution around the world and the staggering impact it has had on the world's environment.

Using the map timeline you can see how industrial revolutions in countries around the world have contributed to the huge growth in global CO2 emissions. Starting in 1750 we can see that there were negligible amounts of carbon dioxide being emitted around the world. However by 1809 the United Kingdom was emitting 33 metric tonnes of CO2.

In 1806 the United Kingdom was responsible for 94% of the world's carbon dioxide emissions. However other countries around the world were not too far behind. Using the map's timeline we can see that just 41 years later, in 1850 the UK's share of CO2 emissions had fallen to 62%, as the USA, France and Germany had begun their own industrial revolutions.