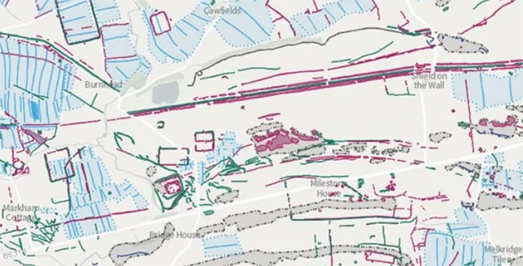 Historic England has released a new interactive map which identifies archaeological sites in England which have been identified, mapped and recorded using aerial photography. The map brings together and makes freely accessible over 30 years of aerial mapping projects.

When you are zoomed out on the Aerial Archaeology Mapping Explorer the map shows in red areas where aerial mapping exists. When you zoom in monument extents are shown on the map in grey. These grey areas show the extent of the archaeological features recorded at the site. If you click on one of these grey areas you can view the complete archaeological monument record for the site.

From my brief exploration of the map this morning I think that the Aerial Archaeological Mapping Explorer has been designed not so much to give the public access to the actual aerial photography and LIDAR data captured by Historic England but to show where this aerial imagery has been used to reveal archaeological monuments. The map can therefore be used to discover where important archaeological sites can be found and to view each site's Historic Environment records and any available reports made about the recorded site.

If you are interested in viewing aerial imagery of what is probably England's most famous archaeological site then you might like Historic England's Stonehenge World Heritage Site Landscape Map. This interactive map allows you to view aerial imagery of 46 listed archaeological sites in and around Stonehenge, learn more about each site and download each site's report.

Historic England's 2002 National Mapping Project of Stonehenge discovered around 539 important archaeological sites around Stonehenge. About thirty percent of the newly discovered sites were prehistoric or Roman in date. These included ring ditches, field systems, round barrows and enclosures of various forms dating from prehistory.

46 of these new sites can be viewed on the Historic England map by clicking on the numbered markers on the map or by selecting them from the map sidebar. When you select a site from the sidebar or map, the map zooms to show the listed site and information for the site is displayed in the map side panel. A link to download the individual site's National Mapping Project report is also provided in the map side panel.
Keir Clarke at 5:44 AM
Share